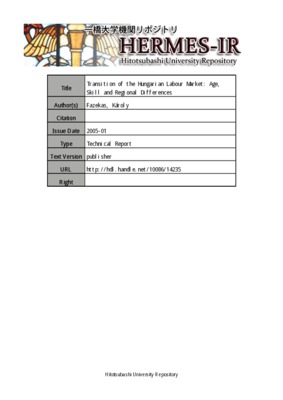 The system change has been accompanied by large scale redundancies, massive and frequently long-term unemployment, a high level of inactivity and growing income and regional disparities in Hungary. Transition has its winners and losers both in terms of economic activity and wages. The paper describes the role of three factors: age, skill, and location shaping labour market differences during three phases of transition. In the first part of the paper, impact of transition on the Hungarian labour market has been discussed. In the second part we investigate the evolution of age and skill related differences on the labour market. In the third part regional differences will be discussed. Section four concludes and discusses policy options available to reduce labour market disparities in the following years.科学研究費補助金（特定領域研究） = Grant-in-Aid for Scientific Research on Priority Areas28 p