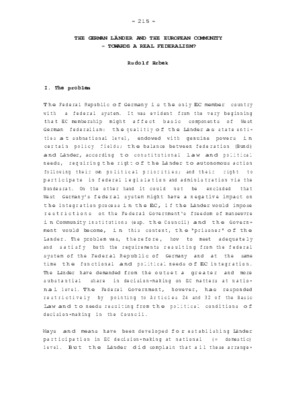 The German Länder and the European community : towards a real federalism?

The Federal Republic of Germany is the only EC member country with a federal system. It was evident from the very beginning that EC membership might affect basic components of West German federalism: the qualitiy of the Länder as state entities at subnational level, endowed with genuine powers in certain policy fields; the balance between federation (Bund) and Länder, according to constitutional law and political needs, requiring the right of the Länder to autonomous action following their own political priorities; and their right to participate in federal legislation and administration via the Bundesrat. On the other hand it could not be excluded that West Germany's federal system might have a negative impact on the integration process in the EC, if the Länder would impose restrictions on the Federal Government's freedom of manoeuvre in Community institutions (esp. the Council) and the Government would become, in this context, the "prisoner" of the Länder. The problem was, therefore, how to meet adequately and satisfy both the requirements resulting from the federal system of the Federal Republic of Germany and at the same time the functional and political needs of EC integration. The Länder have demanded from the outset a greater and more substantial share in decision-making on EC matters at national level. The Federal Government, however, has responded restrictively by pointing to Articles 24 and 32 of the Basic Law and to needs resulting from the political conditions of decision-making in the Council