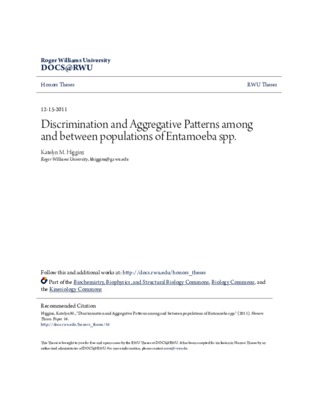 Discrimination and Aggregative Patterns among and between populations of Entamoeba spp.

Kin recognition facilitates the evolution of cooperation in animals, but its relevance in microorganisms and their behavior toward relatives remains unclear. The Entamoeba lineage constitutes an ideal model to determine the behavioral and signaling cues needed for aggregative preference. Chemical cues have been reported for E. histolytica but not E. dispar, suggesting cell-communication between con-specifics and behavioral differences with relevance for disease. Entamoeba varieties have been reported as ‘morphologically undistinguishable’. Two strains of E. invadens have been isolated from different hosts (VK-1: NS - Varanus komodoensis and IP1- serpentes) but were classified within the same ‘species’. Trophozoites of each strain aggregate only with members of their own variety, suggesting they are able to associate based on behavioral and chemical communication. Adaptations to different environments and horizontal gene exchange could have influenced diversification of each lineage. Measurable aggregation and behavioral cues in fluorescence micrographs of Entamoeba varieties suggest that these characteristics should be included in phylogenetic studies