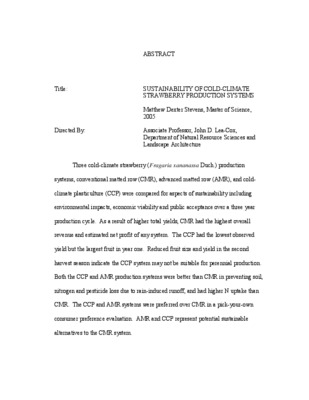 Three cold-climate strawberry (Fragaria xananassa Duch.) production systems, conventional matted row (CMR), advanced matted row (AMR), and cold-climate plasticulture (CCP) were compared for aspects of sustainability including environmental impacts, economic viability and public acceptance over a three year production cycle. As a result of higher total yields, CMR had the highest overall revenue and estimated net profit of any system. The CCP had the lowest observed yield but the largest fruit in year one. Reduced fruit size and yield in the second harvest season indicate the CCP system may not be suitable for perennial production. Both the CCP and AMR production systems were better than CMR in preventing soil, nitrogen and pesticide loss due to rain-induced runoff, and had higher N uptake than CMR. The CCP and AMR systems were preferred over CMR in a pick-your-own consumer preference evaluation. AMR and CCP represent potential sustainable alternatives to the CMR system