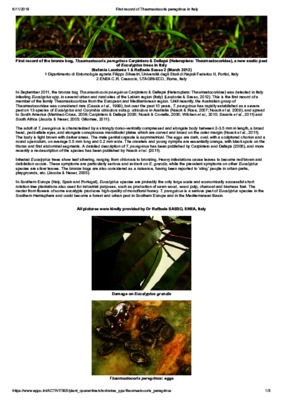 By Stefania Laudonia and Sasso Raffaele
Get PDF (488 KB)

In September 2011, the bronze bug Thaumastocoris peregrinus Carpintero & Dellapé (Heteroptera: Thaumastocoridae) was detected in Italy infesting Eucalyptus spp. in several urban and rural sites of the Latium region (Italy) (Laudonia & Sasso, 2012). This is the first record of a member of the family Thaumastocoridae from the European and Mediterranean region. Until recently, the Australian group of Thaumastocoridae was considered rare (Cassis et al., 1999), but over the past 10 years, T. peregrinus has rapidly established as a severe pest on 13 species of Eucalyptus and Corymbia citriodora subsp. citriodora in Australia (Noack & Rose, 2007; Noack et al. 2009), and spread to South America (Martinez-Crosa, 2008; Carpintero & Dellapé 2006; Noack & Coviella, 2006; Wilcken et al., 2010; Savaris et al., 2011) and South Africa (Jacobs & Neser, 2005; Giliomee, 2011). The adult of T. peregrinus is characterized by a strongly dorso-ventrally compressed and elongate body between 2-3.5 mm in length, a broad head, pedicellate eyes, and elongate conspicuous mandibular plates which are curved and broad on the outer margin (Noack et al., 2011). The body is light brown with darker areas. The male genital capsule is asymmetrical. The eggs are dark, oval, with a sculptured chorion and a round operculum, on average 0.5 mm long and 0.2 mm wide. The crawlers and young nymphs are essentially orange, with black spots on the thorax and first abdominal segments. A detailed description of T. peregrinus has been published by Carpintero and Dellapé (2006), and more recently a re-description of the species has been published by Noack et al. (2011). Infested Eucalyptus trees show leaf silvering, ranging from chlorosis to bronzing. Heavy infestations cause leaves to become red/brown and defoliation occurs. These symptoms are particularly serious and evident on E. grandis, while the prevalent symptoms on other Eucalyptus species are silver leaves. The bronze bugs are also considered as a nuisance, having been reported to ‘sting’ people in urban parks, playgrounds, etc. (Jacobs & Neser, 2005). In Southern Europe (Italy, Spain and Portugal), Eucalyptus species are probably the only large scale and economically successful short rotation tree plantations also used for industrial purposes, such as production of sawn wood, wood pulp, charcoal and biomass fuel. The nectar from flowers of some eucalypts produces high-quality of monofloral honey. T. peregrinus is a serious pest of Eucalyptus species in the Southern Hemisphere and could become a forest and urban pest in Southern Europe and in the Mediterranean Basin