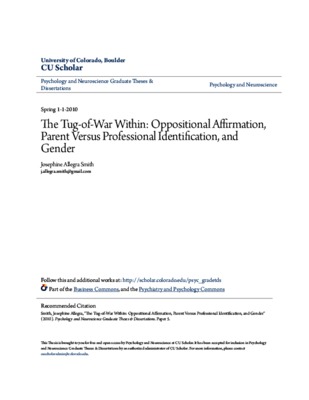 The Tug-of-War Within: Oppositional Affirmation, Parent Versus Professional Identification, and Gender

The self-affirmation literature suggests focusing on other important identities after a failure can repair self-integrity and maintain motivation. In the current research, however, I introduce Oppositional Identity Theory to suggest that an important factor determining continued identification with a threatened identity is the degree to which a threatened identity and the one used to affirm it are in conflict (what I term \u22oppositional identities\u22). Specifically, affirming an oppositional identity after failure could lead to disidentification with the threatened identity. This research tested this hypothesis in two studies by focusing on the divergent experiences of men and women regarding of professional and parenting life. Study 1 used a sample of 242 (120 female) undergraduates who wrote about these two roles as facilitative or oppositional, or about a control topic. Then, participants completed an easy or difficult task ostensibly diagnostic of career aptitude, after which I measured changes in implicit self-role associations with each identity. The design was thus a 2(Domain: Parent, Professional) X 2(Gender) X 3(Role Relation: Facilitative, Oppositional, Control) X 2(Success/Failure). Women shifted their self-role associations toward the parent domain when they experienced a failure and viewed the roles oppositionally; men redoubled their efforts in the professional role after a failure, without showing any effects of the Role Relation manipulation. These effects were most evident for those who felt most self-efficacious about their ability to handle work-family conflicts. Study 2 used an organizational sample of 230 employees of a large federal agency. Participants imagined either a work failure or a success, and then affirmed either the parent or work role, after which changes in implicit self-role associations were measured. The design was a 2(Role Domain: Parent, Work) X 2(Gender) X 2(Success/Failure) X 2(Affirmation Domain). Results indicated that women shifted their implicit self-role identifications more towards their parent identity relative to their work identity after a failure and subsequent parent affirmation, whereas men shifted towards the work identity after a failure regardless of affirmation domain. These effects were most apparent for those who had the fewest children. Implications for understanding social trends, developing interventions, and current self-affirmation theory are discussed