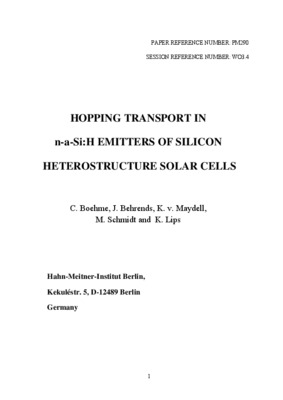 Hopping transport through heterostructure solar cells based on B doped crystalline silicon wafers with highly P doped hydrogenated amorphous silicon emitters with different thicknesses is investigated at T 10 K with pulsed electrically detected magnetic resonance. The measurements show that transport is dominated by conduction band tail states g amp; 8776; 2.0046 with a distribution of their mutual coupling strength. The signal intensity correlates to the sample thickness and the g factors do not exhibit an anisotropy which suggests that transport is still dominated by bulk properties of amorphous silicon. In addition, two broad Pdonor hyperfine satellites can be detected. Influences of interface defects such as Pb like states known from silicon dioxide interfaces are either suppressed by the high Fermi energy at the interface or not presen