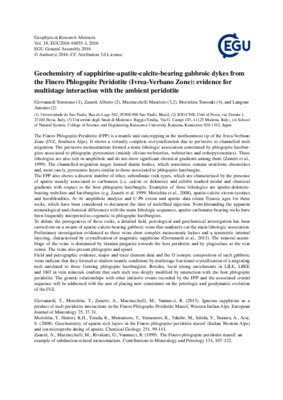 Geochemistry of sapphirine-apatite-calcite-bearing gabbroic dykes from the Finero Phlogopite Peridotite (Ivrea-Verbano Zone): evidence for multistage interaction with the ambient peridotite

The Finero Phlogopite-Peridotite (FPP) is a mantle unit outcropping in the northernmost tip of the Ivrea-Verbano Zone (IVZ, Southern Alps). It shows a virtually complete recrystallization due to pervasive to channelled melt migration. The pervasive metasomatism formed a main lithologic association constituted by phlogopite harzburgites associated to phlogopite pyroxenites (mainly olivine-websterites, websterites and orthopyroxenites). These lithologies are also rich in amphibole and do not show significant chemical gradients among them (Zanetti et al., 1999). The channelled migration stages formed dunite bodies, which sometimes contain stratiform chromitites and, more rarely, pyroxenite layers similar to those associated to phlogopite harzburgite. The FPP also shows a discrete number of other, subordinate rock-types, which are characterised by the presence of apatite usually associated to carbonates (i.e. calcite or dolomite) and exhibit marked modal and chemical gradients with respect to the host phlogopite harzburgite. Examples of these lithologies are apatite-dolomitebearing wehrlites and harzburgites (e.g. Zanetti et al. 1999; Morishita et al., 2008), apatite-calcite zircon-syenites and hornblendites. Ar-Ar amphibole analysis and U-Pb zircon and apatite data return Triassic ages for these rocks, which have been considered to document the time of melt/fluid injection. Notwithstanding the apparent mineralogical and chemical differences with the main lithologic sequences, apatite-carbonates-bearing rocks have been frequently interpreted as cogenetic to phlogopite harzburgites. To debate the petrogenesis of these rocks, a detailed field, petrological and geochemical investigation has been carried out on a swarm of apatite-calcite-bearing gabbroic veins that randomly cut the main lithologic association. Preliminary investigation evidenced as these veins show complex metasomatic haloes and a symmetric internal layering, characterised by crystallisation of magmatic sapphirine (Giovanardi et al., 2013). The mineral assemblage of the veins is dominated by titanian pargasite towards the host peridotite and by plagioclase at the vein centre. The veins also present phlogopite and spinel. Field and petrographic evidence, major and trace element data and the O isotopic composition of such gabbroic veins indicate that they formed at shallow mantle conditions by multistage fractional crystallisation of a migrating melt unrelated to those forming phlogopite harzburgites. Besides, local strong enrichments in LILE, LREE and 18O in vein minerals confirm that such melt was deeply modified by interaction with the host phlogopite peridotite. The genetic relationships with other intrusive events recorded by the FPP and the associated crustal sequence will be addressed with the aim of placing new constraints on the petrologic and geodynamic evolution of the IVZ