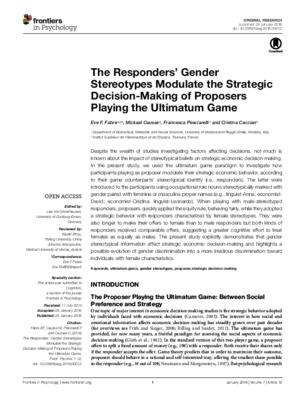 Despite the wealth of studies testing the factors affecting decisions, not much is known about the impact of stereotypical beliefs on strategic economic decision-making. In the present study, we used the ultimatum game paradigm to investigate how participants playing as proposers modulate their strategic economic behavior, according to their game counterparts\u2019 stereotypical identity (i.e., responders). The latter were introduced to the participants using occupational role nouns stereotypically marked with gender paired with feminine or masculine proper names (e.g., linguist-Anna; economist-David; economist-Cristina; linguist-Leonardo). When playing with male-stereotyped responders, proposers quickly applied the equity rule, behaving fairly, while they adopted a strategic behavior with responders characterized by female stereotypes. They were also longer to make their offers to female than to male responders but both kinds of responders received comparable offers, suggesting a greater cognitive effort to treat females as equally as males. The present study explicitly demonstrates that gender stereotypical information affect strategic economic decision-making and highlights a possible evolution of that gender discrimination into a more insidious discrimination toward individuals with female characteristics