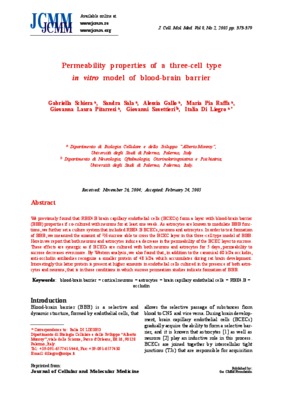 Permeability properties of a three-cell type in vitro model of blood-brain barrier.

We previously found that RBE4.B brain capillary endothelial cells (BCECs) form a layer with blood-brain barrier (BBB) properties if co-cultured with neurons for at least one week. As astrocytes are known to modulate BBB functions, we further set a culture system that included RBE4.B BCECs, neurons and astrocytes. In order to test formation of BBB, we measured the amount of 3H-sucrose able to cross the BCEC layer in this three-cell type model of BBB. Herein we report that both neurons and astrocytes induce a decrease in the permeability of the BCEC layer to sucrose. These effects are synergic as if BCECs are cultured with both neurons and astrocytes for 5 days, permeability to sucrose decreases even more. By Western analysis, we also found that, in addition to the canonical 60 kDa occludin, anti-occludin antibodies recognize a smaller protein of 48 kDa which accumulates during rat brain development. Interestingly this latter protein is present at higher amounts in endothelial cells cultured in the presence of both astrocytes and neurons, that is in those conditions in which sucrose permeation studies indicate formation of BBB