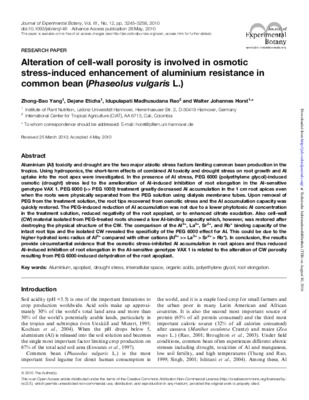 Aluminium (Al) toxicity and drought are the two major abiotic stress factors limiting common bean production in the tropics. Using hydroponics, the short-term effects of combined Al toxicity and drought stress on root growth and Al uptake into the root apex were investigated. In the presence of Al stress, PEG 6000 (polyethylene glycol)-induced osmotic (drought) stress led to the amelioration of Al-induced inhibition of root elongation in the Al-sensitive genotype VAX 1. PEG 6000 (>> PEG 1000) treatment greatly decreased Al accumulation in the 1 cm root apices even when the roots were physically separated from the PEG solution using dialysis membrane tubes. Upon removal of PEG from the treatment solution, the root tips recovered from osmotic stress and the Al accumulation capacity was quickly restored. The PEG-induced reduction of Al accumulation was not due to a lower phytotoxic Al concentration in the treatment solution, reduced negativity of the root apoplast, or to enhanced citrate exudation. Also cell-wall (CW) material isolated from PEG-treated roots showed a low Al-binding capacity which, however, was restored after destroying the physical structure of the CW. The comparison of the Al(3+), La(3+), Sr(2+), and Rb(+) binding capacity of the intact root tips and the isolated CW revealed the specificity of the PEG 6000 effect for Al. This could be due to the higher hydrated ionic radius of Al(3+) compared with other cations (Al(3+) >> La(3+) > Sr(2+) > Rb(+)). In conclusion, the results provide circumstantial evidence that the osmotic stress-inhibited Al accumulation in root apices and thus reduced Al-induced inhibition of root elongation in the Al-sensitive genotype VAX 1 is related to the alteration of CW porosity resulting from PEG 6000-induced dehydration of the root apoplast.BMZ/GTZ/05.7860.9-001.0