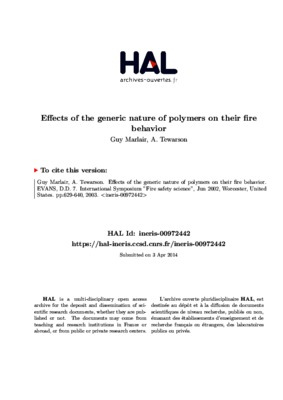 Effects of the generic nature of polymers on their fire behavior

International audienceFire behavior of four aliphatic and two aromatic C, H, O, N, S, and Cl atom containing polymers has been examined. Experiments were performed in three ASTM E 2058 Fire Propagation Apparatuses. The differences in the ignition behavior of polymers were found to be mainly due to differences in the ignition temperature. Chemical effects appear to contribute about 25 % towards the ignition resistance of the polymers. For thermoplastics, formation of polymer melt and its burning as a pool fire was found to increase the fire intensity by factors of two to four. The combustion efficiency and generation efficiency of CO2 were found to decrease and the generation efficiencies of CO and smoke were found to increase by changes in the generic nature of the polymers (aliphatic to aromatic to halogenated). About four times as much carbon atoms in the polymers converted to smoke than converted to CO. Large-scale fire propagation behavior of polymers was characterized by a Fire Propagation Index (FPI). The FPI values of melting type thermoplastics (showing rapid-fire propagation behavior) were high, whereas they were low for the engineered charring type and halogenated polymers (showing either slow or decelerating fire propagation behavior)