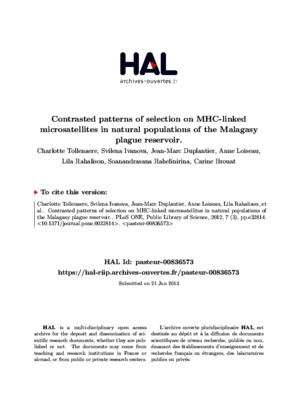 Contrasted patterns of selection on MHC-linked microsatellites in natural populations of the Malagasy plague reservoir.

International audiencePlague (Yersinia pestis infection) is a highly virulent rodent disease that persists in many natural ecosystems. The black rat (Rattus rattus) is the main host involved in the plague focus of the central highlands of Madagascar. Black rat populations from this area are highly resistant to plague, whereas those from areas in which the disease is absent (low altitude zones of Madagascar) are susceptible. Various lines of evidence suggest a role for the Major Histocompatibility Complex (MHC) in plague resistance. We therefore used the MHC region as a candidate for detecting signatures of plague-mediated selection in Malagasy black rats, by comparing population genetic structures for five MHC-linked microsatellites and neutral markers in two sampling designs. We first compared four pairs of populations, each pair including one population from the plague focus and one from the disease-free zone. Plague-mediated selection was expected to result in greater genetic differentiation between the two zones than expected under neutrality and this was observed for one MHC-class I-linked locus (D20Img2). For this marker as well as for four other MHC-linked loci, a geographic pattern of genetic structure was found at local scale within the plague focus. This pattern would be expected if plague selection pressures were spatially variable. Finally, another MHC-class I-linked locus (D20Rat21) showed evidences of balancing selection, but it seems more likely that this selection would be related to unknown pathogens more widely distributed in Madagascar than plague