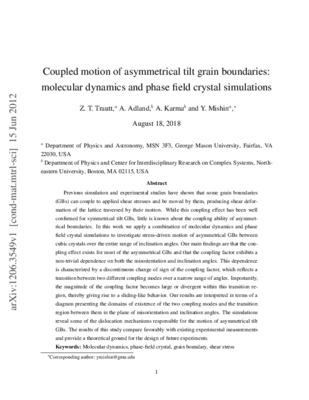 Previous simulation and experimental studies have shown that some grain boundaries (GBs) can couple to applied shear stresses and be moved by them, producing shear deformation of the lattice traversed by their motion. While this coupling effect has been well confirmed for symmetrical tilt GBs, little is known about the coupling ability of asymmetrical boundaries. In this work we apply a combination of molecular dynamics and phase field crystal simulations to investigate stress-driven motion of asymmetrical GBs between cubic crystals over the entire range of inclination angles. Our main findings are that the coupling effect exists for most of the asymmetrical GBs and that the coupling factor exhibits a non-trivial dependence on both the misorientation and inclination angles. This dependence is characterized by a discontinuous change of sign of the coupling factor, which reflects a transition between two different coupling modes over a narrow range of angles. Importantly, the magnitude of the coupling factor becomes large or divergent within this transition region, thereby giving rise to a sliding-like behavior. Our results are interpreted in terms of a diagram presenting the domains of existence of the two coupling modes and the transition region between them in the plane of misorientation and inclination angles. The simulations reveal some of the dislocation mechanisms responsible for the motion of asymmetrical tilt GBs. The results of this study compare favorably with existing experimental measurements and provide a theoretical ground for the design of future experiments