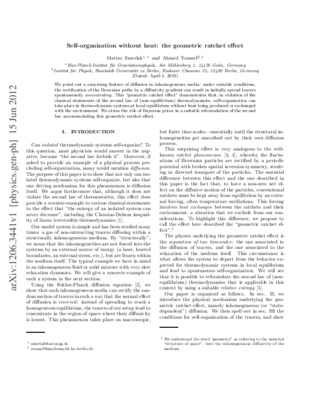 By Matteo Smerlak and Ahmed Youssef
Get PDF (251 KB)

We point out a surprising feature of diffusion in inhomogeneous media: under suitable conditions, the rectification of the Brownian paths by a diffusivity gradient can result in initially spread tracers spontaneously concentrating. This "geometric ratchet effect" demonstrates that, in violation of the classical statements of the second law of (non-equilibrium) thermodynamics, self-organization can take place in thermodynamic systems at local equilibrium without heat being produced or exchanged with the environment. We stress the role of Bayesian priors in a suitable reformulation of the second law accommodating this geometric ratchet effect.Comment: 8 pages, 4 figure