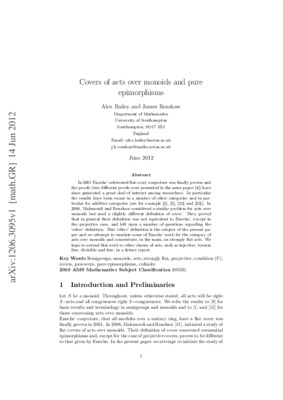 Covers of acts over monoids and pure epimorphisms

By Alex Bailey and James Renshaw
Get PDF (305 KB)

In 2001 Enoch's celebrated flat cover conjecture was finally proven and the proofs (two different proofs were presented in the same paper [4]) have since generated a great deal of interest among researchers. In particular the results have been recast in a number of other categories and in particular for additive categories (see for example [2], [3], [22] and [23]). In 2008, Mahmoudi and Renshaw considered a similar problem for acts over monoids but used a slightly different definition of cover. They proved that in general their definition was not equivalent to Enoch's, except in the projective case, and left open a number of questions regarding the `other' definition. This `other' definition is the subject of the present paper and we attempt to emulate some of Enoch's work to the category of acts over monoids and concentrate in the main on strongly flat acts. We hope to extend this work to other classes of acts, such as injective, torsion free, divisible and free, in a future report