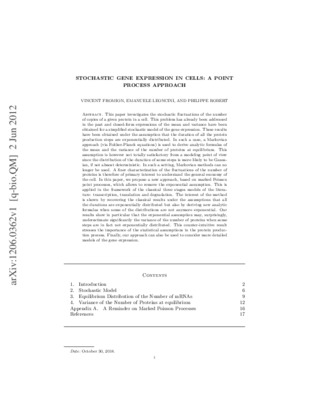 This paper investigates the stochastic fluctuations of the number of copies of a given protein in a cell. This problem has already been addressed in the past and closed-form expressions of the mean and variance have been obtained for a simplified stochastic model of the gene expression. These results have been obtained under the assumption that the duration of all the protein production steps are exponentially distributed. In such a case, a Markovian approach (via Fokker-Planck equations) is used to derive analytic formulas of the mean and the variance of the number of proteins at equilibrium. This assumption is however not totally satisfactory from a modeling point of view since the distribution of the duration of some steps is more likely to be Gaussian, if not almost deterministic. In such a setting, Markovian methods can no longer be used. A finer characterization of the fluctuations of the number of proteins is therefore of primary interest to understand the general economy of the cell. In this paper, we propose a new approach, based on marked Poisson point processes, which allows to remove the exponential assumption. This is applied in the framework of the classical three stages models of the literature: transcription, translation and degradation. The interest of the method is shown by recovering the classical results under the assumptions that all the durations are exponentially distributed but also by deriving new analytic formulas when some of the distributions are not anymore exponential. Our results show in particular that the exponential assumption may, surprisingly, underestimate significantly the variance of the number of proteins when some steps are in fact not exponentially distributed. This counter-intuitive result stresses the importance of the statistical assumptions in the protein production process