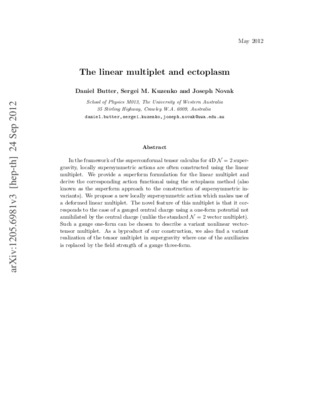 The linear multiplet and ectoplasm

In the framework of the superconformal tensor calculus for 4D N=2 supergravity, locally supersymmetric actions are often constructed using the linear multiplet. We provide a superform formulation for the linear multiplet and derive the corresponding action functional using the ectoplasm method (also known as the superform approach to the construction of supersymmetric invariants). We propose a new locally supersymmetric action which makes use of a deformed linear multiplet. The novel feature of this multiplet is that it corresponds to the case of a gauged central charge using a one-form potential not annihilated by the central charge (unlike the standard N=2 vector multiplet). Such a gauge one-form can be chosen to describe a variant nonlinear vector-tensor multiplet. As a byproduct of our construction, we also find a variant realization of the tensor multiplet in supergravity where one of the auxiliaries is replaced by the field strength of a gauge three-form.Comment: 31 pages; v3: minor corrections and typos fixed, version to appear in JHE