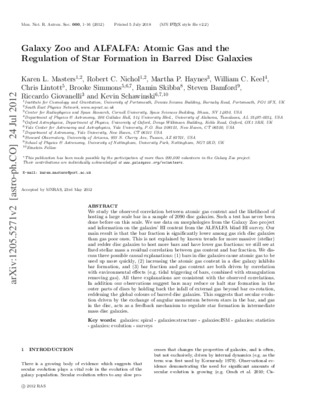 Galaxy Zoo and ALFALFA: Atomic Gas and the Regulation of Star Formation in Barred Disc Galaxies

We study the observed correlation between atomic gas content and the likelihood of hosting a large scale bar in a sample of 2090 disc galaxies. Such a test has never been done before on this scale. We use data on morphologies from the Galaxy Zoo project and information on the galaxies' HI content from the ALFALFA blind HI survey. Our main result is that the bar fraction is significantly lower among gas rich disc galaxies than gas poor ones. This is not explained by known trends for more massive (stellar) and redder disc galaxies to host more bars and have lower gas fractions: we still see at fixed stellar mass a residual correlation between gas content and bar fraction. We discuss three possible causal explanations: (1) bars in disc galaxies cause atomic gas to be used up more quickly, (2) increasing the atomic gas content in a disc galaxy inhibits bar formation, and (3) bar fraction and gas content are both driven by correlation with environmental effects (e.g. tidal triggering of bars, combined with strangulation removing gas). All three explanations are consistent with the observed correlations. In addition our observations suggest bars may reduce or halt star formation in the outer parts of discs by holding back the infall of external gas beyond bar co-rotation, reddening the global colours of barred disc galaxies. This suggests that secular evolution driven by the exchange of angular momentum between stars in the bar, and gas in the disc, acts as a feedback mechanism to regulate star formation in intermediate mass disc galaxies.Comment: 16 pages, 10 figures. In press at MNRAS. v2 contains corrections found in proof