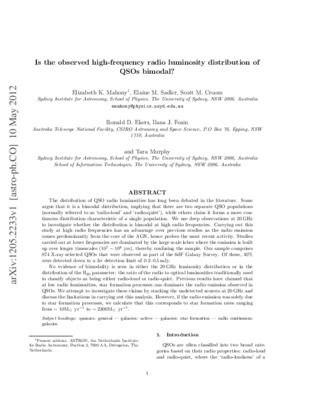 Is the observed high-frequency radio luminosity distribution of QSOs bimodal?

The distribution of QSO radio luminosities has long been debated in the literature. Some argue that it is a bimodal distribution, implying that there are two separate QSO populations (normally referred to as 'radio-loud' and 'radio-quiet'), while others claim it forms a more continuous distribution characteristic of a single population. We use deep observations at 20 GHz to investigate whether the distribution is bimodal at high radio frequencies. Carrying out this study at high radio frequencies has an advantage over previous studies as the radio emission comes predominantly from the core of the AGN, hence probes the most recent activity. Studies carried out at lower frequencies are dominated by the large scale lobes where the emission is built up over longer timescales (10^7-10^8 yrs), thereby confusing the sample. Our sample comprises 874 X-ray selected QSOs that were observed as part of the 6dF Galaxy Survey. Of these, 40% were detected down to a 3 sigma detection limit of 0.2-0.5 mJy. No evidence of bimodality is seen in either the 20 GHz luminosity distribution or in the distribution of the R_20 parameter: the ratio of the radio to optical luminosities traditionally used to classify objects as being either radio-loud or radio-quiet. Previous results have claimed that at low radio luminosities, star formation processes can dominate the radio emission observed in QSOs. We attempt to investigate these claims by stacking the undetected sources at 20 GHz and discuss the limitations in carrying out this analysis. However, if the radio emission was solely due to star formation processes, we calculate that this corresponds to star formation rates ranging from ~10 solar masses/yr to ~2300 solar masses/yr.Comment: 13 pages, 11 figures. Accepted for publication in Ap