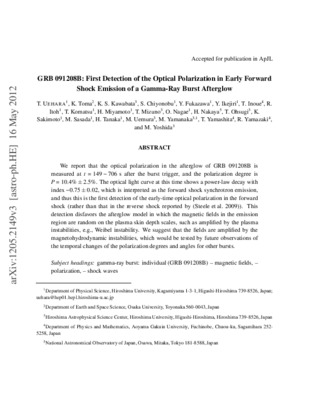 GRB 091208B: First Detection of the Optical Polarization in Early Forward Shock Emission of a Gamma-Ray Burst Afterglow

We report that the optical polarization in the afterglow of GRB 091208B is measured at t = 149 - 706 s after the burst trigger, and the polarization degree is P = 10.4% +/- 2.5%. The optical light curve at this time shows a power-law decay with index -0.75 +/- 0.02, which is interpreted as the forward shock synchrotron emission, and thus this is the first detection of the early-time optical polarization in the forward shock (rather than that in the reverse shock reported by Steele et al. (2009). This detection disfavors the afterglow model in which the magnetic fields in the emission region are random on the plasma skin depth scales, such as amplified by the plasma instabilities, e.g., Weibel instability. We suggest that the fields are amplified by the magnetohydrodynamic instabilities, which would be tested by future observations of the temporal changes of the polarization degrees and angles for other bursts.Comment: 12 pages, 4 figures, accepted for publication in ApJ Letter