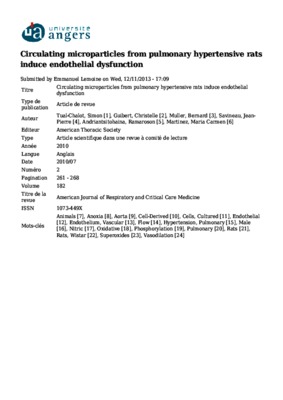 RATIONALE: Pulmonary arterial hypertension (PAH) is a severe disease characterized by an increase of pulmonary vascular resistance, which is accompanied by functional and structural changes in pulmonary arteries. Microparticles (MPs) have been described as biological vector of endothelial dysfunction in other pathologies.OBJECTIVES: The purpose of this work was to characterize circulating MPs during hypoxic PAH and to study their effects on endothelial function. METHODS: Male Wistar rats were exposed or not to chronic hypoxia, and normoxic or hypoxic MPs from blood were characterized by flow cytometry. Endothelial cells (ECs) from rat aorta or pulmonary arteries were incubated with MPs, and then expression and phosphorylation of enzymes involved in nitric oxide (NO) and reactive oxygen species productions were analyzed. Hypoxic MPs were injected into rats, and endothelium-dependent relaxation was assessed. MEASUREMENTS AND MAIN RESULTS: Circulating levels of MPs from hypoxic rats were twofold higher than those present in normoxic rats. In vitro treatment of ECs with hypoxic MPs reduced NO production in aortas and pulmonary arteries by enhancing phosphorylation of endothelial NO synthase at the inhibitory site. Hypoxic MPs increased oxidative stress only in pulmonary ECs via xanthine oxidase and mitochondrial implication. In vivo injection of hypoxic MPs into rat impaired endothelium-dependent relaxation both in aorta and pulmonary arteries. CONCLUSIONS: These data provide evidence that hypoxic circulating MPs induce endothelial dysfunction in rat aorta and pulmonary arteries by decreasing NO production. Moreover, MPs display tissue specificity with respect to increased oxidative stress, which occurs only in pulmonary ECs