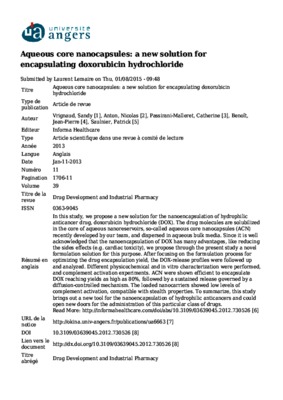 In this study, we propose a new solution for the nanoencapsulation of hydrophilic anticancer drug, doxorubicin hydrochloride (DOX). The drug molecules are solubilized in the core of aqueous nanoreservoirs, so-called aqueous core nanocapsules (ACN) recently developed by our team, and dispersed in aqueous bulk media. Since it is well acknowledged that the nanoencapsulation of DOX has many advantages, like reducing the sides effects (e.g. cardiac toxicity), we propose through the present study a novel formulation solution for this purpose. After focusing on the formulation process for optimizing the drug encapsulation yield, the DOX-release profiles were followed up and analyzed. Different physicochemical and in vitro characterization were performed, and complement activation experiments. ACN were shown efficient to encapsulate DOX reaching yields as high as 80%, followed by a sustained release governed by a diffusion-controlled mechanism. The loaded nanocarriers showed low levels of complement activation, compatible with stealth properties. To summarize, this study brings out a new tool for the nanoencapsulation of hydrophilic anticancers and could open new doors for the administration of this particular class of drugs. Read More: http://informahealthcare.com/doi/abs/10.3109/03639045.2012.73052