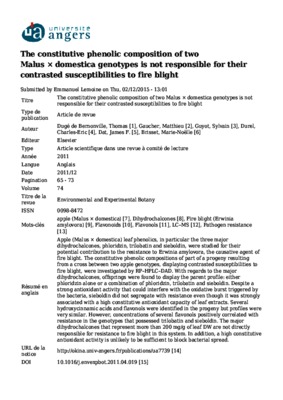 Apple (Malus × domestica) leaf phenolics, in particular the three major dihydrochalcones, phloridzin, trilobatin and sieboldin, were studied for their potential contribution to the resistance to Erwinia amylovora, the causative agent of fire blight. The constitutive phenolic compositions of part of a progeny resulting from a cross between two apple genotypes, displaying contrasted susceptibilities to fire blight, were investigated by RP–HPLC–DAD. With regards to the major dihydrochalcones, offsprings were found to display the parent profile: either phloridzin alone or a combination of phloridzin, trilobatin and sieboldin. Despite a strong antioxidant activity that could interfere with the oxidative burst triggered by the bacteria, sieboldin did not segregate with resistance even though it was strongly associated with a high constitutive antioxidant capacity of leaf extracts. Several hydroxycinnamic acids and flavonols were identified in the progeny but profiles were very similar. However, concentrations of several flavonols positively correlated with resistance in the genotypes that possessed trilobatin and sieboldin. The major dihydrochalcones that represent more than 200 mg/g of leaf DW are not directly responsible for resistance to fire blight in this system. In addition, a high constitutive antioxidant activity is unlikely to be sufficient to block bacterial spread