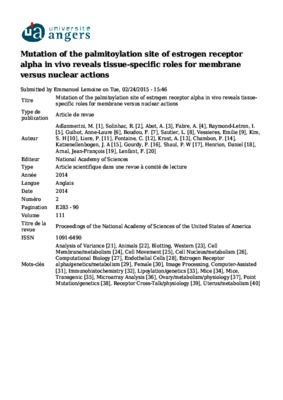 Estrogen receptor alpha (ERalpha) activation functions AF-1 and AF-2 classically mediate gene transcription in response to estradiol (E2). A fraction of ERalpha is targeted to plasma membrane and elicits membrane-initiated steroid signaling (MISS), but the physiological roles of MISS in vivo are poorly understood. We therefore generated a mouse with a point mutation of the palmitoylation site of ERalpha (C451A-ERalpha) to obtain membrane-specific loss of function of ERalpha. The abrogation of membrane localization of ERalpha in vivo was confirmed in primary hepatocytes, and it resulted in female infertility with abnormal ovaries lacking corpora lutea and increase in luteinizing hormone levels. In contrast, E2 action in the uterus was preserved in C451A-ERalpha mice and endometrial epithelial proliferation was similar to wild type. However, E2 vascular actions such as rapid dilatation, acceleration of endothelial repair, and endothelial NO synthase phosphorylation were abrogated in C451A-ERalpha mice. A complementary mutant mouse lacking the transactivation function AF-2 of ERalpha (ERalpha-AF2(0)) provided selective loss of function of nuclear ERalpha actions. In ERalpha-AF2(0), the acceleration of endothelial repair in response to estrogen-dendrimer conjugate, which is a membrane-selective ER ligand, was unaltered, demonstrating integrity of MISS actions. In genome-wide analysis of uterine gene expression, the vast majority of E2-dependent gene regulation was abrogated in ERalpha-AF2(0), whereas in C451A-ERalpha it was nearly fully preserved, indicating that membrane-to-nuclear receptor cross-talk in vivo is modest in the uterus. Thus, this work genetically segregated membrane versus nuclear actions of a steroid hormone receptor and demonstrated their in vivo tissue-specific roles