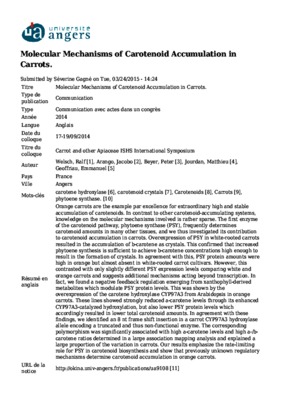 Orange carrots are the example par excellence for extraordinary high and stable accumulation of carotenoids. In contrast to other carotenoid-accumulating systems, knowledge on the molecular mechanisms involved is rather sparse. The first enzyme of the carotenoid pathway, phytoene synthase (PSY), frequently determines carotenoid amounts in many other tissues, and we thus investigated its contribution to carotenoid accumulation in carrots. Overexpression of PSY in white-rooted carrots resulted in the accumulation of b-carotene as crystals. This confirmed that increased phytoene synthesis is sufficient to achieve b-carotene concentrations high enough to result in the formation of crystals. In agreement with this, PSY protein amounts were high in orange but almost absent in white-rooted carrot cultivars. However, this contrasted with only slightly different PSY expression levels comparing white and orange carrots and suggests additional mechanisms acting beyond transcription. In fact, we found a negative feedback regulation emerging from xanthophyll-derived metabolites which modulate PSY protein levels. This was shown by the overexpression of the carotene hydroxylase CYP97A3 from Arabidopsis in orange carrots. These lines showed strongly reduced a-carotene levels through its enhanced CYP97A3-catalyzed hydroxylation, but also lower PSY protein levels which accordingly resulted in lower total carotenoid amounts. In agreement with these findings, we identified an 8 nt frame shift insertion in a carrot CYP97A3 hydroxylase allele encoding a truncated and thus non-functional enzyme. The corresponding polymorphism was significantly associated with high a-carotene levels and high a-/b-carotene ratios determined in a large association mapping analysis and explained a large proportion of the variation in carrots. Our results emphasize the rate-limiting role for PSY in carotenoid biosynthesis and show that previously unknown regulatory mechanisms determine carotenoid accumulation in orange carrots