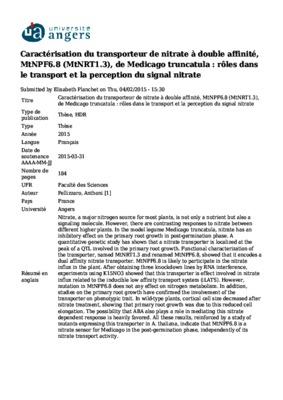 Nitrate, a major nitrogen source for most plants, is not only a nutrient but also a signaling molecule. However, there are contrasting responses to nitrate between different higher plants. In the model legume Medicago truncatula, nitrate has an inhibitory effect on the primary root growth in post-germination phase. A quantitative genetic study has shown that a nitrate transporter is localized at the peak of a QTL involved in the primary root growth. Functional characterization of the transporter, named MtNRT1.3 and renamed MtNPF6.8, showed that it encodes a dual affinity nitrate transporter. MtNPF6.8 is likely to participate in the nitrate influx in the plant. After obtaining three knockdown lines by RNA interference, experiments using K15NO3 showed that this transporter is effect involved in nitrate influx related to the inducible low affinity transport system (iLATS). However, mutation in MtNPF6.8 does not any effect on nitrogen metabolism. In addition, studies on the primary root growth have confirmed the involvement of the transporter on phenotypic trait. In wild-type plants, cortical cell size decreased after nitrate treatment, showing that primary root growth was due to this reduced cell elongation. The possibility that ABA also plays a role in mediating this nitrate dependent response is heavily favored. All these results, reinforced by a study of mutants expressing this transporter in A. thaliana, indicate that MtNPF6.8 is a nitrate sensor for Medicago in the post-germination phase, independently of its nitrate transport activity