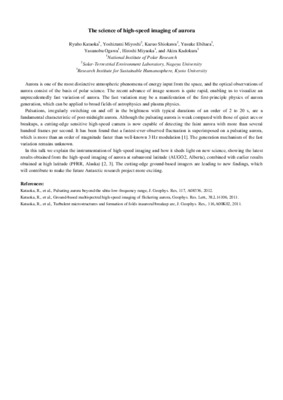 The science of high-speed imaging of aurora

Aurora is one of the most distinctive atmospheric phenomena of energy input from the space, and the optical observations of aurora consist of the basis of polar science. The recent advance of image sensors is quite rapid, enabling us to visualize an unprecedentedly fast variation of aurora. The fast variation may be a manifestation of the first-principle physics of aurora generation, which can be applied to broad fields of astrophysics and plasma physics.Pulsations, irregularly switching on and off in the brightness with typical durations of an order of 2 to 20 s, are a fundamental characteristic of post-midnight aurora. Although the pulsating aurora is weak compared with those of quiet arcs or breakups, a cutting-edge sensitive high-speed camera is now capable of detecting the faint aurora with more than several hundred frames per second. It has been found that a fastest-ever-observed fluctuation is superimposed on a pulsating aurora, which is more than an order of magnitude faster than well-known 3 Hz modulation [1]. The generation mechanism of the fast variation remains unknown.In this talk we explain the instrumentation of high-speed imaging and how it sheds light on new science, showing the latest results obtained from the high-speed imaging of aurora at subauroral latitude (AUGO2, Alberta), combined with earlier results obtained at high latitude (PFRR, Alaska) [2, 3]. The cutting-edge ground-based imagers are leading to new findings, which will contribute to make the future Antarctic research project more exciting.第4回極域科学シンポジウム特別セッション：[S] 南極研究の将来展望―第Ⅸ期6か年計画策定に向けて11月14日（木） 国立極地研究所 ２階大会議