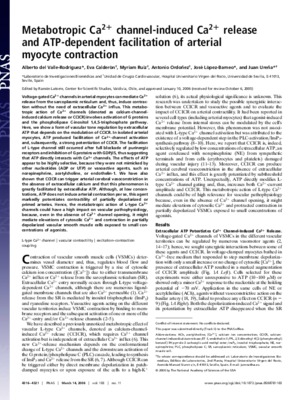 Voltage-gated Ca2_ channels in arterial myocytes can mediate Ca2_ release from the sarcoplasmic reticulum and, thus, induce contraction without the need of extracellular Ca2_ influx. This metabotropic action of Ca2_ channels (denoted as calcium-channelinduced calcium release or CCICR) involves activation of G proteins and the phospholipase C-inositol 1,4,5-trisphosphate pathway. Here, we show a form of vascular tone regulation by extracellular ATP that depends on the modulation of CCICR. In isolated arterial myocytes, ATP produced facilitation of Ca2_-channel activation and, subsequently, a strong potentiation of CCICR. The facilitation of L-type channel still occurred after full blockade of purinergic receptors and inhibition of G proteins with GDP_S, thus suggesting that ATP directly interacts with Ca2_ channels. The effects of ATP appear to be highly selective, because they were not mimicked by other nucleotides (ADP or UTP) or vasoactive agents, such as norepinephrine, acetylcholine, or endothelin-1. We have also shown that CCICR can trigger arterial cerebral vasoconstriction in the absence of extracellular calcium and that this phenomenon is greatly facilitated by extracellular ATP. Although, at low concentrations, ATP does not induce arterial contraction per se, this agent markedly potentiates contractility of partially depolarized or primed arteries. Hence, the metabotropic action of L-type Ca2_ channels could have a high impact on vascular pathophysiology, because, even in the absence of Ca2_ channel opening, it might mediate elevations of cytosolic Ca2_ and contraction in partially depolarized vascular smooth muscle cells exposed to small concentrations of agonists