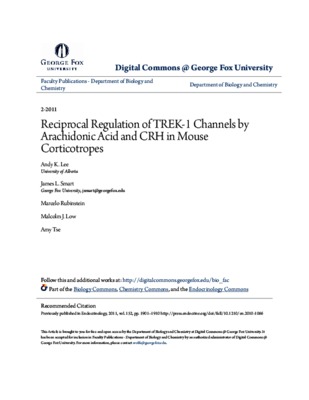 Arachidonic acid (AA) is generated in the anterior pituitary gland upon stimulation by the ACTH secretagogue, CRH. Using the patch clamp technique,we examined the action of AA on the excitability of single pituitary corticotropes obtained from a transgenic mouse strain that expresses the enhanced green fluorescent protein driven by the proopiomelanocortin promoter. CRH evoked depolarization, but AA caused hyperpolarization. Under voltage clamp condition, AA caused a rapid inhibition of the delayed rectifier K current and then increased a background K current. Inhibition of AA metabolism did not prevent the activation of the K current by AA, suggesting a direct action of AA. The sensitivity of the AA-activated K current to fluoxetine, chlorpromazine, extracellular acidification, diphenylbutylpiperidine antipsychotics, and the membrane permeable cAMP analog [8-(4-chlorophenylthio)- cAMP] suggest that the current is mediated via TWIK-related K channel (TREK)-1 channels. Activation of the CRH receptors that are coupled to the adenylate cyclase pathway suppressed the activation of TREK-1 current by AA and reversed the AA-mediated hyperpolarization. Intracellular acidification (pH 7.0)increased the basal amplitude of TREK-1 current and resultedin hyperpolarizaton. CRH suppressed the basal TREK-1 current in cells with intracellular acidification and caused depolarization. Our finding indicates that TREK-1 channels are important in setting the resting potential in corticotropes. The opposing actions of CRH and AA on the excitability of corticotropes raise the possibility that AA may act as a negative feedback regulator to reduce the stimulatory action of CRH and thus prevent excessive ACTH release during chronic stress