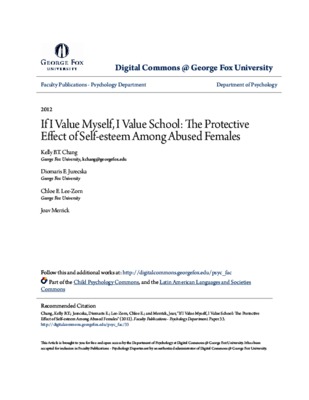 If I Value Myself, I Value School: The Protective Effect of Self-esteem Among Abused Females

Children who have been severely maltreated tend to perform significantly below their non-maltreated peers in standardized tests, earn lower grades and have the most discipline issues in the school setting. There is evidence that self-esteem (SE) may be a protective factor for youth with regard to negative emotional outcomes. The role of self-esteem needs to be explored further in more collectivistic cultures. The purpose of this study was to explore the relationship between physical abuse, SE and school attitudes. Participants included 14 females rescued from a city landfi ll in Nicaragua (ages 7 – 17 years, M = 12.44), half of whom had reported being beaten. SE and attitude toward school (ATS) were assessed using the Spanish Behavior Assessment System for Children. Grade point average (GPA) was obtained from their schools. Females who were beaten had signifi cantly lower SE and a more negative ATS. Their GPA was lower, but not significantly. When SE and abuse were considered together, the effect of abuse on school attitudes was non-significant, suggesting that SE is a protective factor for the effects of abuse on ATS