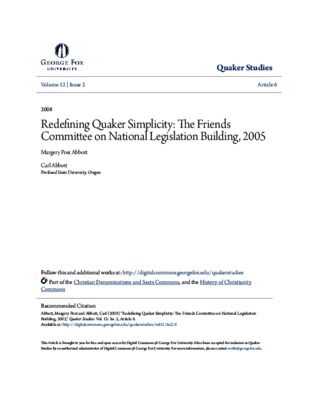 By Margery Post Abbott and Carl Abbott
Get PDF (0 MB)

In 2005, the Friends Committee on National Legislation, the major Quaker peace and justice lobbying organization in the United States, completed a substantial remodeling and expansion of its office building on Capitol Hill in Washington, DC. The building exemplifies a self-conscious effort to express Quaker values of simplicity and stewardship in architectural choices. Examining the changing meanings of simplicity as expressed in Quaker meeting houses, this article argues that contemporary Friends in the United States have given nontraditional meanings to the concept and now associate simplicity with environmental stewardship in personal and community life. For example, the use of natural light now takes on a multitude of symbolic meanings in addition to practical functions. The decision by FCNL to accept the costs and complications of\u27green building\u27 grew directly from this commitment to understanding of simplicity, even though the new structure itself is not necessarily simple in design and engineering