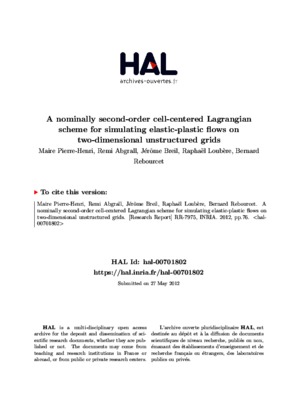 In this paper, we describe a cell-centered Lagrangian scheme devoted to the numerical simulation of solid dynamics on two-dimensional unstructured grids in planar geometry. This numerical method, utilizes the classical elastic-perfectly plastic material model initially proposed by Wilkins [M.L. Wilkins, Calculation of elastic-plastic flow, Meth. Comput. Phys. (1964)]. In this model, the Cauchy stress tensor is decomposed into the sum of its deviatoric part and the thermodynamic pressure which is defined by means of an equation of state. Regarding the deviatoric stress, its time evolution is governed by a classical constitutive law for isotropic material. The plasticity model employs the von Mises yield criterion and is implemented by means of the radial return algorithm. The numerical scheme relies on a finite volume cell-centered method wherein numerical fluxes are expressed in terms of sub-cell force. The generic form of the sub-cell force is obtained by requiring the scheme to satisfy a semi-discrete dissipation inequality. Sub-cell force and nodal velocity to move the grid are computed consistently with cell volume variation by means of a node-centered solver, which results from total energy conservation. The nominally second-order extension is achieved by developing a two-dimensional extension in the Lagrangian framework of the Generalized Riemann Problem methodology, introduced by Ben-Artzi and Falcovitz [M. Ben-Artzi and J. Falcovitz, Generalized Riemann Problems in Computational Fluid Dynamics, Cambridge Monographs on Applied and Computational Mathematics, 2003]. Finally, the robustness and the accuracy of the numerical scheme are assessed through the computation of several test cases