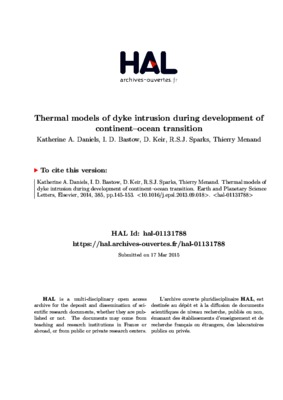 Thermal models of dyke intrusion during development of continent–ocean transition

International audienceA consensus has emerged in recent years from a variety of geoscientific disciplines that extension during continental rifting is achieved only partly by plate stretching: dyke intrusion also plays an important role. Magma intrusion can accommodate extension at lower yield stresses than are required to extend thick, strong, unmodified continental lithosphere mechanically, thereby aiding the breakup process. Dyke intrusion is also expected to heat and thereby weaken the plate, but the spatial extent of heating and the effect of different rates of magmatic extension on the timescales over which heating occurs are poorly understood. To address this issue, a numerical solution to the heat-flow equation is developed here to quantify the thermal effects of dyke intrusion on the continental crust during rifting. The thermal models are benchmarked against a priori constraints on crustal structure and dyke intrusion episodes in Ethiopia. Finite difference models demonstrate that magmatic extension rate exerts a first-order control on the crustal thermal structure. Once dyke intrusion supersedes faulting and stretching as the principal extensional mechanism the crust will heat and weaken rapidly (less than 1 Ma).In the Main Ethiopian Rift (MER), the majority of present-day extension is focused on ∼20 km-wide Quaternary-Recent axial magmatic segments that are mostly seismogenic to mid-crustal depths and show P-wave seismic velocities characteristic of heavily intruded continental crust. When reviewed in light of our models, these observations require that no more than half of the MER's extension since ∼2 Ma has been achieved by dyke intrusion. Magmatic heating and weakening of the crust would have rendered it aseismic if dyke intrusion accounted for the entire 6 mm/yr extension rate. In the older, faster extending (16 mm/yr) Red Sea rift (RSR) in Afar, dyke intrusion is expected to have had a more dramatic impact on crustal rheology. Accordingly, effective elastic plate thickness and Moho depth in the Danakil region of northernmost Afar are markedly reduced and seismicity is shallower than in the MER. Thermally driven variations in crustal rheology over time in response to dyke intrusion thus play an important role in the development of continent–ocean transition