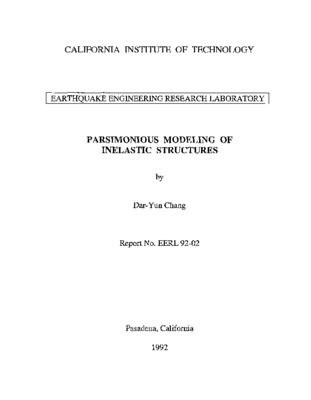 Analytical modeling of one-dimensional hysteresis and general multi-axial cyclic plasticity is studied, with particular emphasis on the parsimony of model parameters and the physical consistency of model behavior. General criteria for good models are proposed to provide guidelines to the modeling studies conducted in this research. Various one-dimensional hysteretic models are examined in detail, including both deteriorating and non-deteriorating models. A general formulation for modeling of degrading systems is presented based on the formulation of the Distributed-Element Model (DEM) and the introduction of a damage index function. A new class of deteriorating Masing models, whose behavior can be completely described by a few simple mathematical rules and the extended Masing rules, is also developed to substitute for a special class of deteriorating DEMs, so that their applicabilty to system identification studies is improved. The one-dimensional DEMs are extended to the multi-dimensional case for constitutive modeling of cyclic plasticity, while preserving the concept of modeling plasticity by an assemblage of simple ideal elasto-plastic elements. In the generalization, a new invariant-yield-surface theory is proposed, in which no kinematic hardening rule is needed to account for the subsequent yielding and strain hardening behavior. A general theory is also developed to elucidate some important properties of material behavior based on the proposed multi-dimensional DEMs. The establishment of the theory provides instructive insight into the elastic-plastic response mechanisms of real materials under complicated loading conditions. Based on the insight, the Masing rules for one-dimensional hysteresis are extended to the multi-dimensional case by introducing a composition of plane-geometry transformations to a response formula developed for initial loading. This transformation method serves as an efficient way of implementing the classical multi-yield-surface theory with the Mroz kinematic hardening rule. Validity of the new formulations are confirmed by comparison with experimental results from the literature