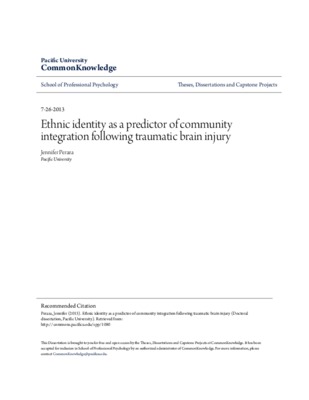 Researchers have found differences between racial groups for outcomes following traumatic brain injury (TBI); however, no study has examined variables that might explain differences between racial groups or that may identify potential protective and risk factors. Ethnic identity has been found to be related to positive outcomes such as self-esteem and quality of life, especially for racial minorities. Therefore, the current study used hierarchical regression analyses to investigate the predictive power of ethnic identity on community integration after TBI, after controlling for other significant variables, for 58 TBI survivors (82.8% Caucasian). Contrary to hypotheses, race and ethnic identity were not predictive of community integration for this sample; however, greater levels of current cognitive and physical problems significantly predicted less community integration (p \u3c .05). These results support previous research findings about the impact of disability on outcomes after TBI. The impact of disability as a diversity variable, as well as the intersection between race and disability, are discussed in the context of a limited racial minority sample