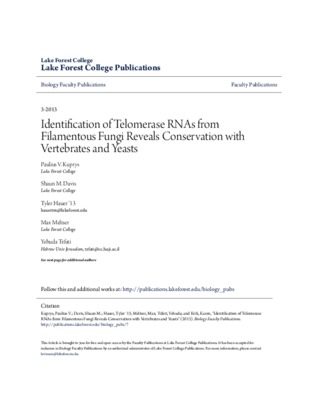 Telomeres are the nucleoprotein complexes at eukaryotic chromosomal ends. Telomeric DNA is synthesized by the ribonucleoprotein telomerase, which comprises a telomerase reverse transcriptase (TERT) and a telomerase RNA (TER). TER contains a template for telomeric DNA synthesis. Filamentous fungi possess extremely short and tightly regulated telomeres. Although TERT is well conserved between most organisms, TER is highly divergent and thus difficult to identify. In order to identify the TER sequence, we used the unusually long telomeric repeat sequence of Aspergillus oryzae together with reverse-transcription-PCR and identified a transcribed sequence that contains the potential template within a region predicted to be single stranded. We report the discovery of TERs from twelve other related filamentous fungi using comparative genomic analysis. These TERs exhibited strong conservation with the vertebrate template sequence, and two of these potentially use the identical template as humans. We demonstrate the existence of important processing elements required for the maturation of yeast TERs such as an Sm site, a 59 splice site and a branch point, within the newly identified TER sequences. RNA folding programs applied to the TER sequences show the presence of secondary structures necessary for telomerase activity, such as a yeast-like template boundary, pseudoknot, and a vertebrate-like three-way junction. These telomerase RNAs identified from filamentous fungi display conserved structural elements from both yeast and vertebrate TERs. These findings not only provide insights into the structure and evolution of a complex RNA but also provide molecular tools to further study telomere dynamics in filamentous fungi