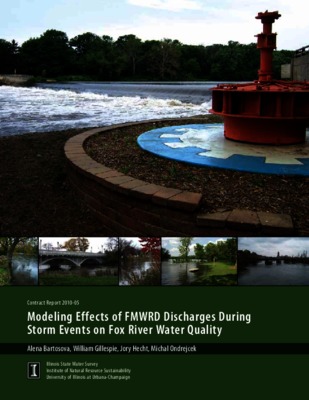 This report summarizes the development of a water quality model for an eight-mile reach of the Fox River in Aurora, Illinois, and evaluates water quality impacts of the Fox Metro Water Reclamation District (FMWRD) discharges during storm events in the Fox River. A part of the FMWRD service area collects both wastewater and stormwater in combined sewers. A portion of the increased volume associated with rain events is released to receiving waters through combined sewer overflows (CSOs). The FMWRD owns and operates one CSO by the treatment plant; remaining CSOs in the area are owned by the City of Aurora. This project focuses on quantifying water quality impacts of modifications planned at the FMWRD facilities on the Fox River to aid in development of the FMWRD CSO long-term control plan (LTCP). The water quality impact was evaluated from two different perspectives. First, a change in Fox River water quality from existing to proposed conditions was assessed. Second, compliance with water quality standards was evaluated for constituents with applicable ambient water quality standards (fecal coliform bacteria and ammonia nitrogen) or a value used by the Illinois Environmental Protection Agency (IEPA) to list a constituent as a potential cause of impairment (total suspended solids, nitrate nitrogen, and total phosphorus). The proposed changes at the FMWRD include a) full treatment expansion increasing the capacity of the plant; b) enhanced phosphorus removal at both new and existing full treatment facilities; and c) a new chemically enhanced primary treatment (CEPT) facility used only during larger storms when inflow exceeds the plant capacity. The CEPT capacity is designed to capture 5-year design storms, i.e., only storms larger than a 5-year storm would result in an overflow of untreated water. This study evaluates impacts that these proposed modifications have on Fox River water quality during storm inflows, focusing on the effect of the FMWRD CSO. A computer model was developed to simulate the fate of nitrogen, phosphorus, suspended solids, and fecal coliforms in the Fox River reach from Sullivan Road Bridge in Aurora to Route 34 Bridge in Oswego using WASP software. The model was calibrated for two storm events (July and August 2008) and verified for two different storm events (September 2008 and August 2009). In addition, the calibrated model was set to simulate the full period between May and October 2008 to validate the model coefficients and any long-term trends that would not be detectable during the short-event simulations. The impact of the FMWRD discharges on biochemical oxygen demand and dissolved oxygen was estimated from discharged loads. Monitoring data collected by Walter E. Deuchler Associates, Inc. (WEDA) during 2008 and 2009 were used to calibrate the model. It is difficult to collect monitoring data during the exact time period when a discharge from CSOs upstream passes through a monitoring location, especially when the time of CSO discharge is not known until after the monitoring is completed. Unfortunately, most monitoring data were collected before or after the peak concentration associated with CSO discharges passed through monitoring locations, catching the receding part of the pollutograph at best. Peak concentrations simulated by the model are thus unverified by field observations. The intensive sampling effort in August 2009 provided the best data, describing the rising portion of the pollutograph, although only for selected constituents. The model matched observed data during the calibration and validation periods adequately, considering the difficulties with data collection and interpretation. The calibrated model was then set to simulate impacts from the FMWRD discharges under existing and proposed conditions. The impact of three design storms (1-year, 5-year, and 10-year) was evaluated for all constituents. The impacts on ammonia nitrogen, total phosphorus, and dissolved oxygen were also evaluated for the more common 3-month storm. The impact of the “no action” condition (expected future inflows treated at existing FMWRD facilities) on ammonia and dissolved oxygen was evaluated for the 5-year storm. Four scenarios were simulated for each design storm and for each FMWRD condition, existing or proposed, to evaluate a range of possible impacts as they change with the changing Fox River flow and water quality. Two selected flows represent a low flow (exceeded on 75% of days) and a median flow (exceeded on 50% of days). Two selected concentrations for each simulated constituent represent a low concentration (exceeded in 75% of samples) and a high concentration (exceeded in 25% of samples). High flow in the Fox River was not simulated at this time as the impact of FMWRD discharges on Fox River water quality is expected to diminish with increased Fox River flow. For all constituents, maximum simulated concentrations under proposed conditions are lower than maximum simulated concentrations under existing conditions. Model simulations indicate the proposed FMWRD discharges under the normal treatment level a) do not cause an exceedance of the water quality standard for fecal coliforms for 5-year and smaller storms; b) would likely not cause exceedances of ammonia water quality standards unless pH and temperature reach high values or upstream ammonia concentrations are high; c) would likely cause exceedance of the total phosphorus listing value when no chemical treatment is applied to CEPT and large storms occur during low flows and high phosphorus concentrations in the Fox River upstream of the FMWRD; and d) would not cause exceedances of the total suspended solids and nitrate nitrogen listing values. The goal of the CSO Control Policy is to limit the number of overflows to four to six per year. The FMWRD is providing full biological treatment for all storms of a corresponding return period (3 months) and a partial treatment, including full disinfection for all storms with a return period between 3 months and 5 years. Proposed modifications will result in a far greater positive effect on Fox River water quality than the minimum required by the CSO Control Policy.published or submitted for publicationis peer reviewe