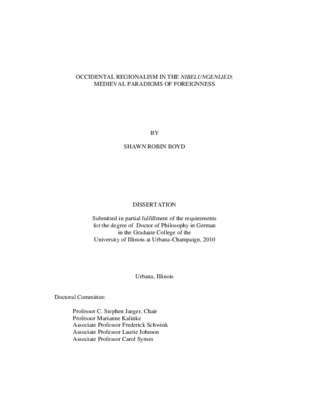 Occidental regionalism in the Nibelungenlied: medieval paradigms of foreignness

This dissertation explores the issue of foreignness in the Nibelungenlied, raising questions about the nature, and crossing, of intra-Christian borders within the text that separate customs, practices, and worldviews. It analyzes cultural alterity and its attendant outcomes in the first half of the Nibelungenlied using concepts from anthropology and cultural and sociological theory. The dissertation argues that multiple levels of foreignness, as defined by the philosopher Bernd Waldenfels, separate characters in the Nibelungenlied. Despite their varying origins, these instances of alienation all have a common result: a lack of a complete picture of the world for individual characters and the prevention of close human connections that would allow intentions and motivations to be divined. Characters??? imperfect understandings of their surroundings are fostered by their foreignness and drive many of the conflicts in the text, including Siegfried???s verbal clash with the Burgundians when he first arrives in Worms, Br??nhild???s entanglement with Gunther and Siegfried, and the argument between Kriemhild and Br??nhild. In addition, this dissertation argues that the constant interaction with the foreign undergone by the court at Worms leads to a change in its culture away from one which sees appearance and reality as one and the same to one that takes advantage of the power granted by a newfound ability to separate Sein from Schein