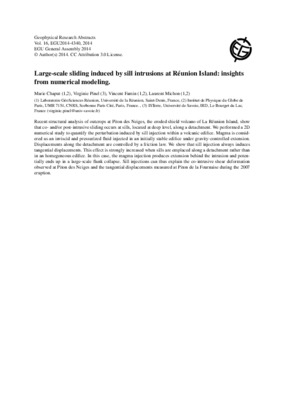 International audienceRecent structural analysis of outcrops at Piton des Neiges, the eroded shield volcano of La Réunion Island, show that co-and/or post-intrusive sliding occurs at sills, located at deep level, along a detachment. We performed a 2D numerical study to quantify the perturbation induced by sill injection within a volcanic edifice. Magma is considered as an inviscid and pressurized fluid injected in an initially stable edifice under gravity-controlled extension. Displacements along the detachment are controlled by a friction law. We show that sill injection always induces tangential displacements. This effect is strongly increased when sills are emplaced along a detachment rather than in an homegeneous edifice. In this case, the magma injection produces extension behind the intrusion and potentially ends up in a large-scale flank collapse. Sill injections can thus explain the co-intrusive shear deformation observed at Piton des Neiges and the tangential displacements measured at Piton de la Fournaise during the 2007 eruption