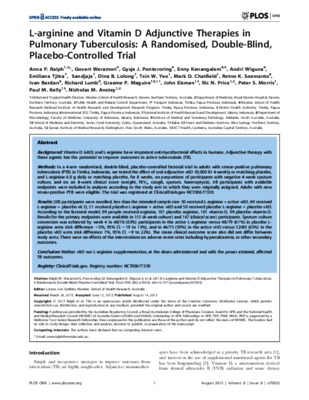 BackgroundVitamin D (vitD) and L-arginine have important antimycobacterial effects in humans. Adjunctive therapy with these agents has the potential to improve outcomes in active tuberculosis (TB).MethodsIn a 4-arm randomised, double-blind, placebo-controlled factorial trial in adults with smear-positive pulmonary tuberculosis (PTB) in Timika, Indonesia, we tested the effect of oral adjunctive vitD 50,000 IU 4-weekly or matching placebo, and L-arginine 6.0 g daily or matching placebo, for 8 weeks, on proportions of participants with negative 4-week sputum culture, and on an 8-week clinical score (weight, FEV1, cough, sputum, haemoptysis). All participants with available endpoints were included in analyses according to the study arm to which they were originally assigned. Adults with new smear-positive PTB were eligible. The trial was registered at ClinicalTrials.gov NCT00677339.Results200 participants were enrolled, less than the intended sample size: 50 received L-arginine + active vitD, 49 received L-arginine + placebo vit D, 51 received placebo L-arginine + active vitD and 50 received placebo L-arginine + placebo vitD. According to the factorial model, 99 people received arginine, 101 placebo arginine, 101 vitamin D, 99 placebo vitamin D. Results for the primary endpoints were available in 155 (4-week culture) and 167 (clinical score) participants. Sputum culture conversion was achieved by week 4 in 48/76 (63%) participants in the active L-arginine versus 48/79 (61%) in placebo L-arginine arms (risk difference &minus;3%, 95% CI &minus;19 to 13%), and in 44/75 (59%) in the active vitD versus 52/80 (65%) in the placebo vitD arms (risk difference 7%, 95% CI &minus;9 to 22%). The mean clinical outcome score also did not differ between study arms. There were no effects of the interventions on adverse event rates including hypercalcaemia, or other secondary outcomes.ConclusionNeither vitD nor L-arginine supplementation, at the doses administered and with the power attained, affected TB outcomes