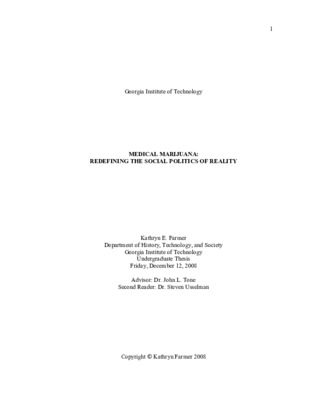 Medical marijuana is a pertinent and controversial topic in contemporary American society. Those against medical marijuana cite the "dangers" the drug presents to society and claim that there is no, and has never been, any medical utility of marijuana. Advocates of medical marijuana refute preconceived ideas of marijuana being dangerous and cite thousands of years of historical evidence that lends credence to the proposed therapeutic effects. Since the prohibition of marijuana in 1937, the federal government has portrayed a negative image of marijuana that remained dominant in public opinion until it began to be challenged forty years ago. Contrary to the statements of the federal government that marijuana has no medical use, world history and modern science has indicated its therapeutic potential. As a result of several medical marijuana laws being enacted since 1996, Congress held a hearing in 2001 to discuss the issues of medical marijuana, federal law enforcement, and the supremacy clause. Many images of marijuana and the user were presented that represented old, traditional beliefs, as well as new images that represent the emerging medical marijuana culture. The disparate views of marijuana can be explained by each person’s own special perception of the drug, which is shaped by one’s own pre-conceived notions, environment, personal experiences, and special view of "reality." Marijuana Medical marijuanaSteven Usselman - Committee Member/Second Reader ; John L. Tone - Faculty Mento