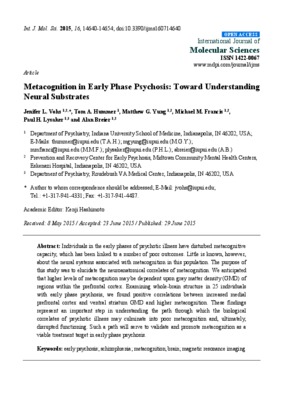 Individuals in the early phases of psychotic illness have disturbed metacognitive capacity, which has been linked to a number of poor outcomes. Little is known, however, about the neural systems associated with metacognition in this population. The purpose of this study was to elucidate the neuroanatomical correlates of metacognition. We anticipated that higher levels of metacognition may be dependent upon gray matter density (GMD) of regions within the prefrontal cortex. Examining whole-brain structure in 25 individuals with early phase psychosis, we found positive correlations between increased medial prefrontal cortex and ventral striatum GMD and higher metacognition. These findings represent an important step in understanding the path through which the biological correlates of psychotic illness may culminate into poor metacognition and, ultimately, disrupted functioning. Such a path will serve to validate and promote metacognition as a viable treatment target in early phase psychosis