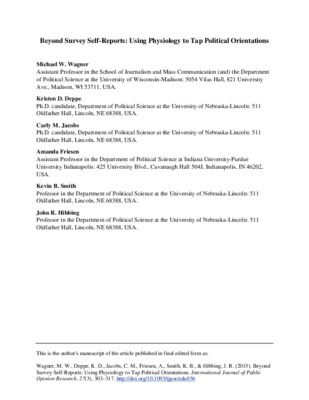 Some aspects of our attitudes are composed of things outside of our consciousness. However, traditional survey research does not use measurements that are able to tap into these aspects of public opinion. We describe, recommend, and demonstrate a procedure by which non-self-reported responses can be measured in order to test whether these responses have independent effects on individuals’ preferences. We use one of the better-known physiological measures—electrodermal activity or skin conductance—and illustrate its potential by reporting our own study of attitudes toward President Barack Obama. We find that both self-reported emotional responses and physiological responses to Obama’s image independently correlate with variation in the intensity of attitudes regarding his job approval and his central policy proposal: health-care reform