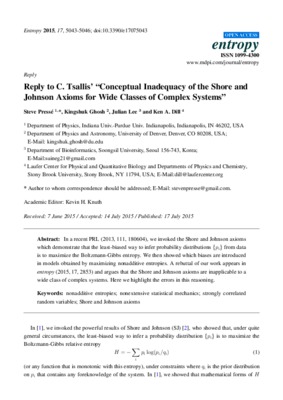 Reply to C. Tsallis’ “Conceptual Inadequacy of the Shore and Johnson Axioms for Wide Classes of Complex Systems”

In a recent PRL (2013, 111, 180604), we invoked the Shore and Johnson axioms which demonstrate that the least-biased way to infer probability distributions {pi} from data is to maximize the Boltzmann-Gibbs entropy. We then showed which biases are introduced in models obtained by maximizing nonadditive entropies. A rebuttal of our work appears in entropy (2015, 17, 2853) and argues that the Shore and Johnson axioms are inapplicable to a wide class of complex systems. Here we highlight the errors in this reasoning