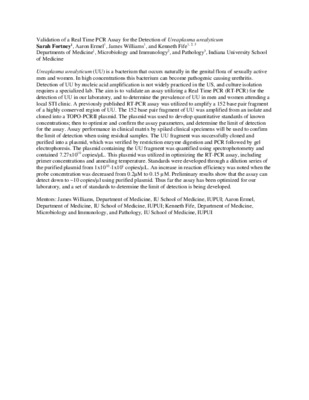 poster abstractUreaplasma urealyticum (UU) is a bacterium that occurs naturally in the genital flora of sexually active men and women. In high concentrations this bacterium can become pathogenic causing urethritis. Detection of UU by nucleic acid amplification is not widely practiced in the US, and culture isolation requires a specialized lab. The aim is to validate an assay utilizing a Real Time PCR (RT-PCR) for the detection of UU in our laboratory, and to determine the prevalence of UU in men and women attending a local STI clinic. A previously published RT-PCR assay was utilized to amplify a 152 base pair fragment of a highly conserved region of UU. The 152 base pair fragment of UU was amplified from an isolate and cloned into a TOPO-PCRII plasmid. The plasmid was used to develop quantitative standards of known concentrations; then to optimize and confirm the assay parameters, and determine the limit of detection for the assay. Assay performance in clinical matrix by spiked clinical specimens will be used to confirm the limit of detection when using residual samples. The UU fragment was successfully cloned and purified into a plasmid, which was verified by restriction enzyme digestion and PCR followed by gel electrophoresis. The plasmid containing the UU fragment was quantified using spectrophotometry and contained 7.27x1010 copies/μL. This plasmid was utilized in optimizing the RT-PCR assay, including primer concentrations and annealing temperature. Standards were developed through a dilution series of the purified plasmid from 1x1010-1x101 copies/μL. An increase in reaction efficiency was noted when the probe concentration was decreased from 0.2μM to 0.15 μM. Preliminary results show that the assay can detect down to ~10 copies/μl using purified plasmid. Thus far the assay has been optimized for our laboratory, and a set of standards to determine the limit of detection is being developed