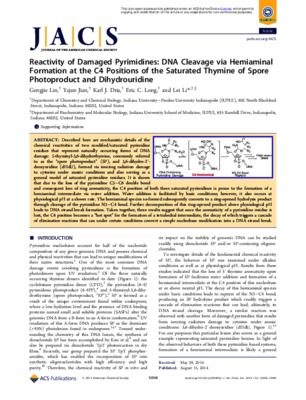 Reactivity of Damaged Pyrimidines: DNA Cleavage via Hemiaminal Formation at the C4 Positions of the Saturated Thymine of Spore Photoproduct and Dihydrouridine

Described here are mechanistic details of the chemical reactivities of two modified/saturated pyrimidine residues that represent naturally occurring forms of DNA damage: 5-thyminyl-5,6-dihydrothymine, commonly referred to as the “spore photoproduct” (SP), and 5,6-dihydro-2′-deoxyuridine (dHdU), formed via ionizing radiation damage to cytosine under anoxic conditions and also serving as a general model of saturated pyrimidine residues. It is shown that due to the loss of the pyrimidine C5–C6 double bond and consequent loss of ring aromaticity, the C4 position of both these saturated pyrimidines is prone to the formation of a hemiaminal intermediate via water addition. Water addition is facilitated by basic conditions; however, it also occurs at physiological pH at a slower rate. The hemiaminal species so-formed subsequently converts to a ring-opened hydrolysis product through cleavage of the pyrimidine N3–C4 bond. Further decomposition of this ring-opened product above physiological pH leads to DNA strand break formation. Taken together, these results suggest that once the aromaticity of a pyrimidine residue is lost, the C4 position becomes a “hot spot” for the formation of a tetrahedral intermediate, the decay of which triggers a cascade of elimination reactions that can under certain conditions convert a simple nucleobase modification into a DNA strand break