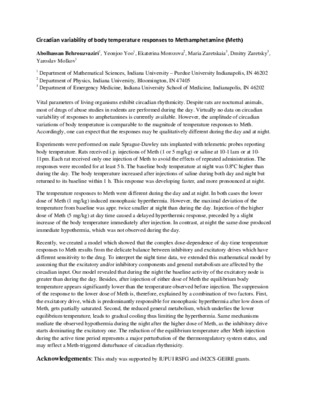 poster abstractVital parameters of living organisms exhibit circadian rhythmicity. Despite rats are nocturnal animals, most of drugs of abuse studies in rodents are performed during the day. Virtually no data on circadian variability of responses to amphetamines is currently available. However, the amplitude of circadian variations of body temperature is comparable to the magnitude of temperature responses to Meth. Accordingly, one can expect that the responses may be qualitatively different during the day and at night. Experiments were performed on male Sprague-Dawley rats implanted with telemetric probes reporting body temperature. Rats received i.p. injections of Meth (1 or 5 mg/kg) or saline at 10-11am or at 10-11pm. Each rat received only one injection of Meth to avoid the effects of repeated administration. The responses were recorded for at least 5 h. The baseline body temperature at night was 0.8ºC higher than during the day. The body temperature increased after injections of saline during both day and night but returned to its baseline within 1 h. This response was developing faster, and more pronounced at night. The temperature responses to Meth were different during the day and at night. In both cases the lower dose of Meth (1 mg/kg) induced monophasic hyperthermia. However, the maximal deviation of the temperature from baseline was appr. twice smaller at night than during the day. Injection of the higher dose of Meth (5 mg/kg) at day time caused a delayed hyperthermic response, preceded by a slight increase of the body temperature immediately after injection. In contrast, at night the same dose produced immediate hypothermia, which was not observed during the day. Recently, we created a model which showed that the complex dose-dependence of day-time temperature responses to Meth results from the delicate balance between inhibitory and excitatory drives which have different sensitivity to the drug. To interpret the night time data, we extended this mathematical model by assuming that the excitatory and/or inhibitory components and general metabolism are affected by the circadian input. Our model revealed that during the night the baseline activity of the excitatory node is greater than during the day. Besides, after injection of either dose of Meth the equilibrium body temperature appears significantly lower than the temperature observed before injection. The suppression of the response to the lower dose of Meth is, therefore, explained by a combination of two factors. First, the excitatory drive, which is predominantly responsible for monophasic hyperthermia after low doses of Meth, gets partially saturated. Second, the reduced general metabolism, which underlies the lower equilibrium temperature, leads to gradual cooling thus limiting the hyperthermia. Same mechanisms mediate the observed hypothermia during the night after the higher dose of Meth, as the inhibitory drive starts dominating the excitatory one. The reduction of the equilibrium temperature after Meth injection during the active time period represents a major perturbation of the thermoregulatory system status, and may reflect a Meth-triggered disturbance of circadian rhythmicity