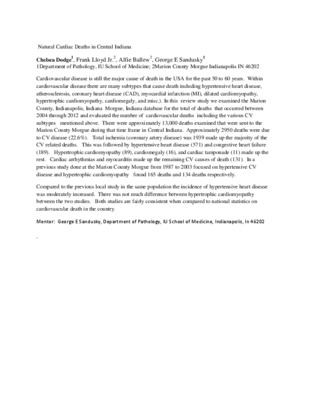 poster abstractCardiovascular disease is still the major cause of death in the USA for the past 50 to 60 years. Within cardiovascular disease there are many subtypes that cause death including hypertensive heart disease, atherosclerosis, coronary heart disease (CAD), myocardial infarction (MI), dilated cardiomyopathy, hypertrophic cardiomyopathy, cardiomegaly, and misc.). In this review study we examined the Marion County, Indianapolis, Indiana Morgue, Indiana database for the total of deaths that occurred between 2004 through 2012 and evaluated the number of cardiovascular deaths including the various CV subtypes mentioned above. There were approximately 13,000 deaths examined that were sent to the Marion County Morgue during that time frame in Central Indiana. Approximately 2950 deaths were due to CV disease (22.6%). Total ischemia (coronary artery disease) was 1939 made up the majority of the CV related deaths. This was followed by hypertensive heart disease (571) and congestive heart failure (189). Hypertrophic cardiomyopathy (89), cardiomegaly (16), and cardiac tamponade (11) made up the rest. Cardiac arrhythmias and myocarditis made up the remaining CV causes of death (131). In a previous study done at the Marion County Morgue from 1987 to 2003 focused on hypertensive CV disease and hypertrophic cardiomyopathy found 165 deaths and 134 deaths respectively. Compared to the previous local study in the same population the incidence of hypertensive heart disease was moderately increased. There was not much difference between hypertrophic cardiomyopathy between the two studies. Both studies are fairly consistent when compared to national statistics on cardiovascular death in the country