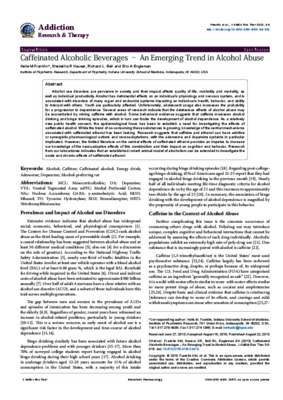 Alcohol use disorders are pervasive in society and their impact affects quality of life, morbidity and mortality, as well as individual productivity. Alcohol has detrimental effects on an individual’s physiology and nervous system, and is associated with disorders of many organ and endocrine systems impacting an individual’s health, behavior, and ability to interact with others. Youth are particularly affected. Unfortunately, adolescent usage also increases the probability for a progression to dependence. Several areas of research indicate that the deleterious effects of alcohol abuse may be exacerbated by mixing caffeine with alcohol. Some behavioral evidence suggests that caffeine increases alcohol drinking and binge drinking episodes, which in turn can foster the development of alcohol dependence. As a relatively new public health concern, the epidemiological focus has been to establish a need for investigating the effects of caffeinated alcohol. While the trend of co-consuming these substances is growing, knowledge of the central mechanisms associated with caffeinated ethanol has been lacking. Research suggests that caffeine and ethanol can have additive or synergistic pharmacological actions and neuroadaptations, with the adenosine and dopamine systems in particular implicated. However, the limited literature on the central effects of caffeinated ethanol provides an impetus to increase our knowledge of the neuroadaptive effects of this combination and their impact on cognition and behavior. Research from our laboratories indicates that an established rodent animal model of alcoholism can be extended to investigate the acute and chronic effects of caffeinated ethanol